…a state of mind

Portugal is one of the most fascinating European Country to visit, with a seafaring past, beautiful seaside resort, melancholic cities and landscapes characterized by olive groves, vineyard and wheat fields. Four decades of dictatorship have marginalized the Country from the center of the European power and the progress of modern life for most of the 20th century. Travellers have mistakenly considered this slow development as a picturesque feature of the Country and, even after the collapse of dictatorship and the return to democracy, Portugal kept its reputation as a second-rate destination.

But it’s not true! Travellers believe wrongly that only the most remote places are magical, but Portugal is one of the most beautiful destinations in the world.

Portugal is not an extension of the Spanish Costa del Sol. In the last twenty years, the Country has overcome its isolation by establishing new links with the rest of Europe, reorganizing the economic system, and trying to preserve the typical aspects of their national culture threatened by a sudden flow of foreign influences. Even if Portugal is following the economic destiny of the European Union, it still seems to look nostalgically to its past.

As per Antonio Tabucchi and Lord Byron, this Country will enchant for its beautiful landscapes, the long coasts overlooking the ocean, the small towns where time seems to have stopped and the traditional cuisine;

a land of warm colours, of sparkling ceramics under the sun, sweet as a puff pastry, melancholic as the notes of a ballad of love…

Portugal is not a Country, but a state of mind.

1 Boat trip to Caves of Benagil 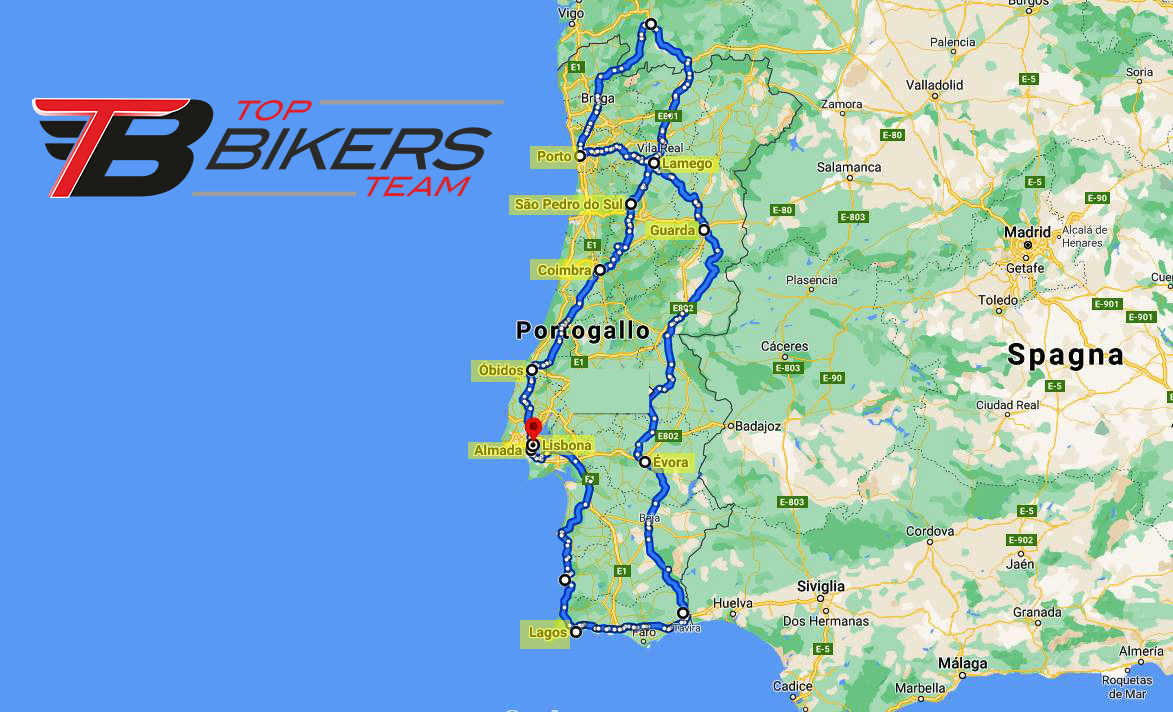 Departure from Milan with arrival in Lisbon in the early afternoon. Transfer to the hotel where our bikes are be waiting for us. The rest of the day is available for visiting the Capital, one of the oldest of Europe. We’re visiting the Convento do Carmo and the nearby Praça do Comércio, we’re moving to the Monument to the Discoveries and then, few steps away, the Monastery dos Jerònimos and the symbol of the Portuguese Capital: the picturesque Tower of Belém.

Let’s go! Across the Bridge 25 de Abril, over the River Tagus, we go southwards crossing the Parque Natural de Arrabida and on a short ferry ride we reach the Costa de Galé. From here we follow the wonderful Atlantic coast, we make a first stop in Odeceixe, an idyllic sandy beach at the mouth of the Seixe, and then continue to the famous Algarve region.

We will admire the view from the Fortaleza de Sagresand then the breathtaking view of Ponta da Piedade.

We proceed along the southern coast of Portugal and stop almost immediately for a boat trip that will lead us to a suggestive place: the Marine Caves of Benagil We continue eastwards and stop in Tavira, an authentic showcase of traditional architecture: We head north to enter the Alentejoregion and its endless plains. On our way to reach today’s destination, Évora, a World Heritage Site by UNESCO, we stop to see the charming village of Portel.

We almost get to the Spanish border until we reach 2 tiny villages with their castles, where the past persists revealing the tenacity of their inhabitants. We’re talking about Marvao and Castelo de Vide. We go northwards to reach Monsanto, in the enchanting countryside of central Portugal, built completely among huge granitic rocks. Today’s destination is Guarda, the highest city of Portugal, perched on one of the slopes of the Serra do Estrela.

We climb the rugged roads of the Parque Natural da Serra da Estrela, the largest mountain chain, and the highest peak in Portugal, and then we head north to reach the wonderful Douro Valley. A stop in the pretty Pinhaowill allow us to enjoy the beauty of the river from a boat, admiring from the water the banks with vineyards. But the beauties of today are not yet finished: our day will end in front of the wonderful baroque staircase that climbs zigzagging up to the Igreja de Nossa Senhora dos Remédios in Lamego.

We leave the Douro River to find it again in the afternoon. We reach Guimaraes, a magnificent example of a traditional northern Portuguese town, rich in character and history that is reflected in its many historical buildings. The first King of Portugal was born here: Alfonso Henriques. We reach Portoimmediately after lunch, so we have time to admire some of its beauties, such as the amazing Lello Library, one of the most beautiful in the world, and perhaps one of its popular wineries that guard huge quantities of the famous liqueur wine.

Still going northwards, we visit the town of Braga, one of the oldest in Portugal, which shows an ancient character full of charm. We immerse ourselves in the Peneda-Gerês National Park, in the extreme north of Portugal, between the regions of Alto Minho and Trás-os-Montes. A world apart, where human activity lives harmoniously together with nature and preserves values and ancient traditions, as we can see in the community villages of Pitões das Júnias and Tourém.

In the morning we stop in the charming Aveiro, known as the Venice of Portugal. Nestled between the sea and the lagoon, with its canals once crossed by colourful “Moliceiros”: traditional boats originally used to collect algae and sargassum. Early in the afternoon we reach Coimbraand we still have a lot of time to enjoy the city. Located on the banks of the Mondego River, Coimbra has been the capital of Portugal for over a hundred years and there is the oldest university in Portugal and one of the oldest in Europe.

We dedicate the whole day to the religious buildings and architecture of Portugal. We begin with one of the most beautiful monumental attractions of all Portugal, the Convento de Cristo in Tomar, an imposing fortified convent strongly linked to the History of the Templars. Then we move to the Monastery of Batalha, a Dominican convent, one of the most impressive religious buildings in Portugal, whose constructions took more than a century. We cross the Parque Natural de Serras de Aire and Candeeiros to reach the Cistercians Monastery of Alcobaça, one of the most evocative and one of the first monument in Portugal. belonging to the monastic order of the Cistercians. We finish with an architectural masterpiece, Obidos: a charming medieval town and the finest example of a Portuguese fortified city.

Last day on our bikes, full of emotions. We reach Sintra, a lovely Portuguese town located on the hills of the Serra de Sintra, a pearl of Portugal. Fabulous atmosphere, historic buildings and breathtaking views will enchant us The Palácio da Pena, one of the greatest examples of romantic revivalism of the 19th century; the Palace and the Gardens of Monserrate with their bridges, waterfalls, fountains and gardens. Then we overlook the hills of Cabo da Rocafor a last look at the Atlantic in the westernmost place of continental Europe. Arrival in Lisbon in mid-afternoon.

Last half day available for a final greeting to the most western capital of Europe and the only one to overlook the Atlantic Ocean. Transfer to the airport early in the afternoon for the flight to Italy. Arrival at destination late in the afternoon.

The tour will be confirmed with a minimum of 10 participants