from Saturday 18 September to Sunday 26 September 2021

In the Mediterranean there are many islands that compete for the love of motorcyclists and we have included the two most fascinating in a single tour. Two islands very close to each other, in some aspects similar, almost sisters and from a distant common past, but at the same time distinct and distant. Each with its own characteristics and peculiarities that always know how to surprise and never disappoint. Between the two Corsica is perhaps the shyest and, for this reason, able to give strong emotions. In Sardinia, however, the dialogue between nature and unspoilt beaches is woven by thousands of km of winding roads with perfect asphalt, allowing motorcyclists to combine the pleasure of driving with the sense of adventure.

A mountain in the middle of the sea: this is Corsica, sold off as an object of exchange from the Genoese to the French in 1768. A gesture that tells a lot about the rebellious heart and the desire for independence of its inhabitants. The Greeks, known lovers of beautiful things, called it and is still considered the Île de Beauté. Think that it takes only 28 km in the crow flies to go from a Caribbean Sea to 2,706 m of sharp peaks dusted with snow. About a third of Corsica is protected by a park and much of the coast is still immune to wild concrete flows, giving it

The cradle of the Nuragic civilization, Sardinia is the second largest island in the Mediterranean. A special region and repository of a history that makes it an island with unique ethnic and linguistic peculiarities. It has always been used as a naval berth by many Mediterranean civilisations, and has been coveted for its territory rich in woods, water and metals, and has been able to take advantage of its isolation and strategic position to develop an autonomous historical and cultural heritage. The curious conformation of Sardinia induced the Greeks to call it Ichnusa, that is “footprint” and more than 80 percent of its territory is mountainous or hilly, that makes the driving lively but at the same time relaxed given the lack of traffic on the island.

In short, two unparalleled beauties, two authentic wild pearls combined in a single path that contemplates the best tracks of both to give motorcyclists two gifts at once, because the turns and fun are never too much! 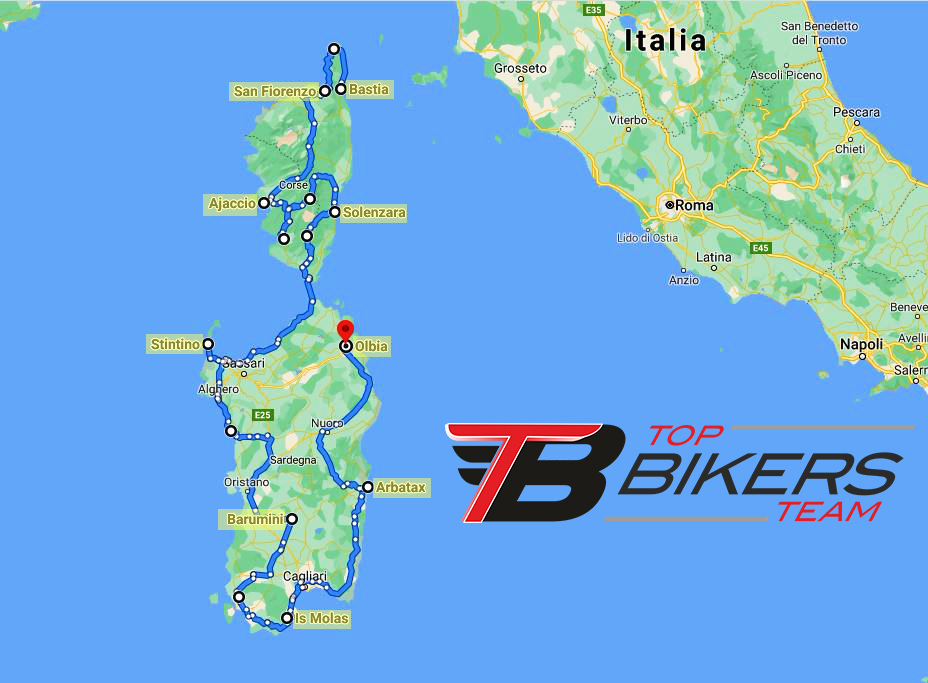 Meeting of participants and companions at the port of Livorno at 12:00 a.m., formalities and boarding, departure at 02:00 p.m. In just over 4 hours we cross the Tyrrhenian Sea and at 06:30 p.m. we already put the wheels on the Corsican ground. covered by the desolate coastal garrigue. We will arrive at the hotel where probably dinner already awaits us but it will definitely be worth it!

We leave the coast shortly after the departure, immediately entering the thick heart of the island and reaching Corte. Located in the heart of the island, is home to the only university in Corsica, the most important place to discover is but the unmissable is the that dominates the town. We return just a little up to take the , which offers a of the region: from the mountain to the sea, passing through the , sometimes rough and generous, in perfect balance between driving and landscape. Reached and passed Porto we take the : the gigantic granite formations that are the (Unesco World Heritage Site since 1983) light up like burning stones giving a breath-taking chromatic range. A few kilometres but to trickle meter after meter and fix in the memory.

From the Gulf of Ajaccio to the Gulf of Proprianoto reach “the most beautiful of the Corsican cities”, Sartene. A with old stone houses, medieval alleys and squares shaded by fragrant lime trees where you can stroll or simply sip a coffee. The road calls and we climb back in the saddle immediately taking the that brings us to 1,193 meters above sea level, a step by the strong landscape emotions even if not as wild as it used to be. We descend towards the sea stopping in , one of the most beautiful of the “” of Corsica. Here the air is good and drink a beer Stone “amber chestnut” in the courtyard of the bar in the square has its own why. Today’s final destination is the cosy

Sea behind us, we climb the mountains again taking the mountain road that connects Solenzara to Porto-Vecchiowith a virtuous ups and downs between Zonzaand the east coast. We cross the at 1,218 m, with splendid granite spires and a venerated . Here the scenic curiosity are the treetops, all bent by the wind. Then again towards the sea where we are catapulted inside the and we will flank the homonymous lake surrounded by pine and beech trees. We reach Bonifacio, being immediately struck by the fantastic sight of the “Ville blanche” suspended on top of the limestone cliff, overlooking the spectacular that separates it from Sardinia. A short visit of Bonifacio just to capture the last essence of Corsica before boarding the ferry that will take us to Sardinia in about an hour. Once , Capo Testa and its monumental immediately welcomed us. We continue keeping the sea on the right until we see the horizon walls and ramparts, we are in , charming medieval village overlooking a cobalt sea. Today’s day ends in front of in a place that boasts famous beaches all over the world: .

From the promontory of Stintino to the promontory of Capo Caccia where breath-taking views are lost on the horizon. Then we with its historic centre in Gothic style and the avenues paved in marble and it is from here that one of the most spectacular coastal roads in the world begins: the . Kilometres of cliffs overlooking the sea and enchanting views. In Bosa we leave the sea behind to enter the heart of the island reaching the . Place of a unique beauty, located in central-southern Sardinia, is a park composed of woods of cork oaks and Mediterranean maquisthat is home to a very rare species in Italy and Europe of wild horses of small stature called precisely “Cavallini of the Giara“. We arrive at our destination to be ready the next day for a very interesting visit.

Before the departure a guided tour of the imposing archaeological site of “Su Nuraxi” (Sardinian term for “Il Nuraghe”), the most important megalithic monuments in Sardinia, whose function is still the subject of discussion among archaeologists. We reach again the coast at the height of We are in the , in the South-West of the island, among mountains and shrubs forged by the wind, in the wildest and most isolated Sardinia where it develops an imposing coastal extension of about 47 kilometres to drive remaining bewitched. A succession of unspoilt beaches, such as with the , cliffs that burst into a sea with green waters, open and deep loved by the most reckless surfers, where the eye gets lost in the sky that is tinged with pink at sunset. But not only sea, the sites of mining archaeology of Montevecchio, Buggerru, and that of Porto Flavia in Masua, where the cliff was excavated for nearly 600 meters to allow the transport of minerals to the sea, just in front of the spectacular Pan di Zucchero stacks. We continue down south for a stop at the charming presided over by the . From here the is very close. One of the most beautiful streets of the island, it extends along the south-eastern coast and offers some truly incredible panoramic views and for this reason also called Panoramic Road of the South Coast. Before reaching our destination, we cross one of the most flourishing natural sites of southern Sardinia, theforest of Is Cannoneris. A lush forest that will envelop us in a , place of mysterious tales between reality and fantasy.

Still coast, still sea in asuccession of turns up to Simius, from here begins our return to the north crossing the famous Costa Rei up to the famous SS 125 Oriental Sardinia, a beautiful winding track that winds along the right side of the island. From here we pass the that leads us to the , a wild landscape linked to agropastoral traditions and, what few know, the homeland of successful aging. This is one of the five areas of the world that have the highest percentages of long-lived people among their inhabitants. It is no coincidence that in 2014 the longest-lived family in the world was Perdasdefogu: eight brothers for a total of 828 years! We leave behind the, limestone reliefs from the singular form, to descend towards the coast. A breath-taking panorama will welcome us upon arrival, whose name derives from the extraordinary particularity of the porphyry cliffs emerging from the sea. opens to the east of the port of , with a bottom of white rocks and high red granite rocks, which give a unique and extremely fascinating. Their reflection gives the water an iridescent colour on the emerald green.

From Arbatax, where it starts at sea level, the road climbs up the hill to Dorgali: here starts the Passo di Genna Silana, which in a succession of curves exceeds 1000 meters high. We are in the true heart, and perhaps soul, of Sardinia: A huge territory that occupies the slopes of the , mountain massif in the centre of the island, and the minor reliefs around. The name Barbagia is linked to the fact that the Sardinians who resisted the conquests of Carthaginians and Romans took refuge here, even if in reality there are more Barbagias. We then reach the , where a masterpiece of nature emerges: the springs of . Sculpted by the power of water and immersed in an oasis of lush vegetation. One more stop in , cradle of archaic traditions whose history is told by the f painted on the walls of their homes From here, passing by Bitti and Buddusò, we head to Olbia where a ferry is waiting for us to take us home. Scheduled boarding at 08:00 p.m. and departure at 09:30 p.m.

Disembarkation scheduled for 07:00 a.m. farewell by the companions and return to their homes.

The tour will be confirmed upon reaching 15 participants