Chile as you never see it

A journey to discover Chile, an extraordinary and unique country with thousands of natural contests. A strip of land 4300 kilometres long,between the Pacific Ocean and the Andes Cordillera A geographical path from the elegantcapital Santiago to the Tropic of Capricorn to jump into spectacular environments and landscapes.

Norte Grande and Norte Chico are the two regions in the North of Chile and will be the location of our deep trip to South America.

Norte Grande, in the extreme north of Chile, bordered by Bolivia and Peru, offers salar, geysers and coastal deserts of which the largest is AtacamaDesert, the most arid in the world. Norte Chico, immediately to the south, is a region characterized by a transitional climate, arid in the north and temperate in the central area. Close to the coastal plains there are highlands with brackish lakes dominated by the snowy peaks of the Andes and by many volcanic cones marking the border with Bolivia and Argentina.

Geography is not the only aspect on this journey of discovery, we will tread in the footsteps of Nobel-winning poets and writers such as Gabriela Mistral and Pablo Neruda. Into the narrow Andean valleys will find out hidden distilleries of Pisco and astronomical observatories. We’ll be visiting also the fascinating industrial archaeologies, scattered in the vast desert lands reachable only through scenic dusty roads, such as the Salitrera Humberstone and the Museo Ferroviario of Baquedano We will be dazzled by the white of the Andean salars and modern or natural monuments such as the Hand of the Desert and the Pan de Azùcar; we’ll be walking in the atmosphere of cultural heritages such as Santiago and Valparaìso.

All this and much more in atwo-week trip of nearly 5,000 km that will drive most on asphalt and on the famous and excellentdirt roads of Chile. 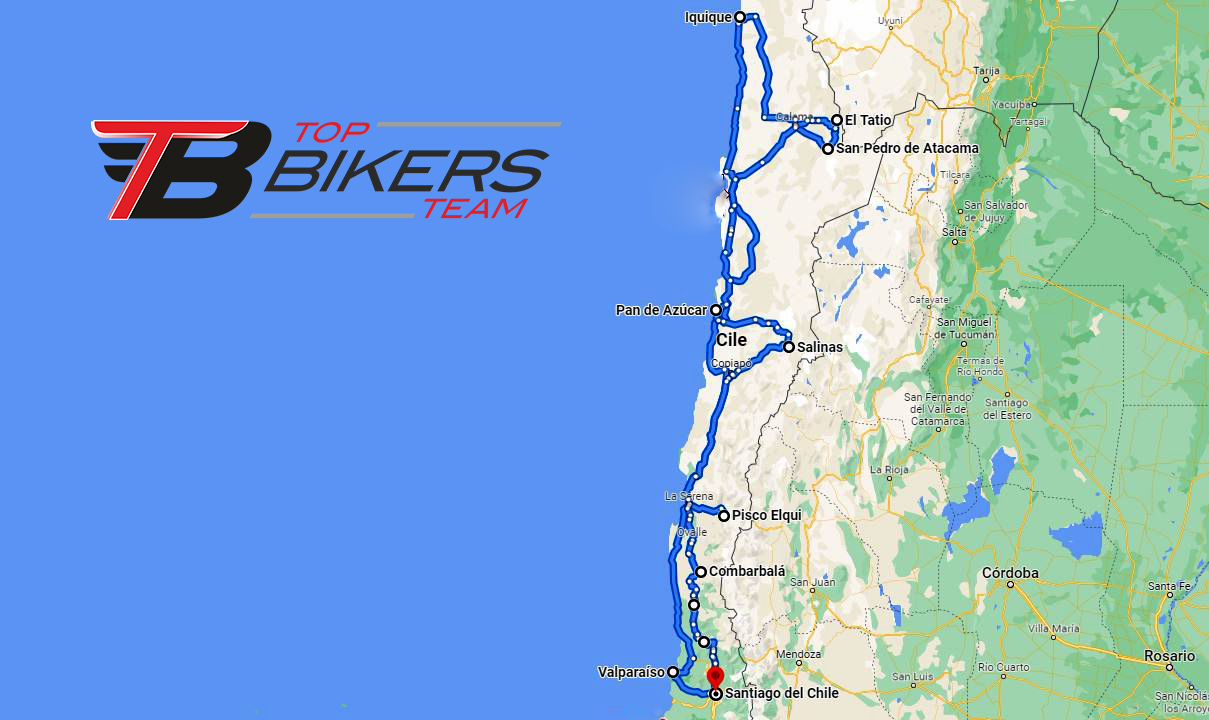 Arrival in Santiago de Chile early in the morning, transfer to the hotel and room assignment. Visit of the Chilean Capital while we get used to the jet lag. Walking through Plaza de Armas, the heart of the old colonial city center, the Palacio de la Moneda, we will reach the Cerro Santa Lucia to get a spectacular view of the city from above. Dinner in a city restaurant and overnight at the hotel.

Pick up of the motorbikes and departure towards the Pacific coast until we reach Isla Negra, to visit the residence of Pablo Neruda, nowadays a museum. A stop in Cantalaoto admire, as Neruda wrote, the “sea that roars“, then we continue to Valparaísoand spend the afternoon visiting the city: thebohemian soul, the blue of the Ocean, small streets adorned with colourful graffiti, gastronomic corners and historic elevators.

We head north and drive along the seafront of Viña del Mar, called La Ciudad Jardín. Still along the majestic Pacific coast, the ocean on the left, crossing imposing wind farms, we reach La Serena, dominated by its monumental lighthouse.

We travel along Ruta 5, also known as Panamericana Norte, then we turn towards Huascofollowing the river and the Ruta de los Olivos Centenarios. Reached the coast once again, we drive northwards entering the Llanos de Challe National Park. Here the coast, the mountains and the surrounding area are characterized by pristine beaches of white sand and wetted by the Camanchaca(shoals of sea clouds formed on the coast). creating a fragile ecosystem, habitat for rare and beautiful plants, such as the Garra de León, and for the largest Guanachi population in the Atacama region.

From here, the Panamericana Norte becomes the Ruta del Desierto, we are in the Atcama Region. After Chanaral, we turn to reach the picturesque Parque Nacional Pan de Azucar, with marine and terrestrial environments, a varied and abundant flora and fauna like the feline otter. There are at least 27 species of cactus and 21 are endemic!

Last day with the compass facing north and the immensity of the Pacificon the left. A stop at the Mirador La Portada, where a last bulwark of rock still resists the ocean lashes, then another nice visit to the salt museum in Playa Rio Seco before we reach the last destination where the Corbeta Esmeralda awaits us to tell us about the Pacific War.

Lasciamo l’oceano alle spalle e puntiamo verso l’interno percorrendo lande desolate e apparentemente infruttuose. We leave the ocean behind and head inland through wasteland, seemingly fruitless. Despite this apparence, at the end of 1800, in these areas many saltpetre refineries prospered for several decades until they disappeared in the sixties of the ‘900. In 1970, the saltpetre refineries of Humberstone and Santa Laura, now “ghost towns”, were declared a national monument and in 2005 they were declared a World Heritage Site by UNESCO. And right here we stop today.

We climb the gentle but inexorable slopes of the cordillera passing tiny villages in adobe, then the wonder: the geysers of El Tatio. Among the Andean peaks, steam fumes and jets of boiling water liven up the Atacama Desert. El Tatio is a geothermal field, one of the most magical places in northern Chile, located at 4320 masl., more than 80 active geysers, which together form the largest geothermal field in the southern hemisphere and the third largest in the world. A surreal and fascinating place.

We are in the heart of the Atacama Desert, framed between the Andes mountains and the Pacific Ocean. Boundless arid expanses, in an inhospitable climate, characterize one of the most remote and fascinating places on the earth: canyons sculpted by the erosion of the wind and large salt lakes give the impression of having landed on another planet. Here, at an altitude of over 2,400 meters the sky has never seemed so close. The nights in the Atacama Desert offer clear and transparent skiesfor about 300 days a year, so that three of the major international astronomical observatoriesare located within walking distance from San Pedro.

We still drive through barrenand arid expanses, between open mines still active and others now abandoned. Oficine salitrere abandoned, as Chacabuco, that became a prison in the time of Pinochet. Places that slowly reborn, like the railway station of Baquedano with its 16 locomotives(6 of which still steam). We reach the ocean view again in the middle of the afternoon.

Some of you may ask: “but when will we see it?” Well, today we will see the Hand of Desierto! Made in 1992, an imposing granite hand with tapered fingers stretched out in a sort of greeting. A little further south, and perhaps even more imposing, one of the observatories that for a long time had the world’s most powerful optical instrument: an 8.2 m diameter VLT telescope!

We are in the region of Norte Chico, we go southwards until we reach Copiapòfollowing the river with the same name. The Copiapò Valley is dotted with picturesque villages, ochre churches, nineteenth-century foundries and diaguita-inca foundries dating back to 7 centuries ago. But it was not the gold fever that favored economic development in this area but the silver one.

The Atacama Desert is now far away and we can see it from the evident presence of greenish spots that more and more frequent appear along the rivers descending from the Andean Cordillera. The presence of water, combined with climate, allows fruit trees to grow up, such as papaya, avocadoand especially grapes. And from grapes we get the most famous brandy in South America: the Pisco! We will stay in the Valle of Elqui, the heart of the production of this extraordinary distillate.

Through the Quebrada Mollaca and the Quebrada del Pangue we drive into the cordillera among spectacular mountains coloured by metal oxide. Then we skirt the Rio Hurtadoto Ovallealong a sinuous piece of excellent asphalt. But the surprises do not end here: before arriving at destination we will cross the Reserva Nacional Las Chinchillas, a huge protected park dedicated to these cute little rodents. Beware that chinchillas never give way!

Last day of travel but no lack of attractions. On a road built on the site of a former railway, dotted with narrow and dark tunnels, we travel the last kilometres until Santiago. Arrival in the capital in the mid-afternoon, drop off of the motorbikes and transfer to the hotel.

In the morning transfer to the airport and scheduled flight to return to home.

The tour will be confirmed with a minimum of 10 participants